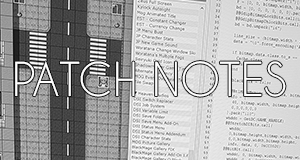 • The new massage parlor scenes have been added to the game. We’re deciding if we should make new assets to the final repeatable scene or if we’ll re-use the existing ones depending on the popularity and feedback of those scenes.

• Added an Autosave feature to the game. It Autosaves every time you open the menu and change maps. You can find the Autosave above all the other saves. It will overwrite itself but not your saves.

• Autosave feature has replaced Window Skin in the options menu. Now you can turn Autosave ON and OFF so in case you’re using an older computer it doesn’t become annoying.

• Added VX Ace mouse support by VLUE, will try to bugfix and fully implement in the game. Please be patient with us while we fully implement this script as we’re still debugging it. Right now we have no issues but I’m sure you guys will find some.

• Fixed an issue where the game would crash on opening the save/load menu after the mouse script was added.

• Fixed an issue where having the mouse script would create shadows in the game.

• Fixed an issue where mouse support would begin as soon as the project was opened instead of only after the player got in the game.

• Added an option in the menu to enable the mouse support to be turned on/off.

• Fixed an issue where the mouse support would be on when told to be off and vice-versa.

• Fixed an issue where the game wouldn’t play a sound if changing between options via mouse instead of keyboard.

• Fixed an issue where the mouse icon offset on the game menu was way off.

• Removed the teleport ring from the game! People kept causing bugs due to it and reporting them. It was nice knowing ye, it’s time to go.

• All the events in the game are now fixed until the 12th day instead of the 10th day to make sense story wise and force Ayame to reunite with a certain character.

• The officer Chloe minigame can only be started after the 15th instead of the 10th due to the changes in the Sato route in the line above this one.

• Closed the beach during night time.

• Made some changes to the RTE to make sure you’re only shown the tutorial once.

• The requirements to see the Gym scenes are now lower and for some scenes non-existent. You still have to have 5 gym classes and 5 swimming classes and alternate between both but no other requirements beyond that.

• Changed the requirements for the Bachelorette Party. Ayame now needs to be in the Fallen state to make sense story wise. We might change it in the next patch and tie it to morality instead.

• The NPC that starts an event in West Inwood now disappears when he’s not supposed to be there.

• Remastered the first shower scene in the game.

• Changed the background color for a few choices in the game to be consistent with the rest of the game.

• Overhauled the “Highway” map to offer easier access to the Kinky Kittens strip club as well as improving how it looked in general and making the entrances/exits are more intuitive.

• Overhauled the nudity portion of the “Beach” map to harbor the upcoming scenes as well as making it bigger and look overall better.

• Overhauled the “Massage Parlor” map to harbor the upcoming scenes, doubling it’s size and introducing the “examination room” which required a lot of new assets.

• Ported the “Choice” windows from IF to the original game due to popular demand.

• Ported the main menu from IF to the original game due to popular demand.

• Ported the “Daytime change” backgrounds from IF to the original game due to popular demand.

• Moved a scene from the bits (groping scene in the cosplay convention) to the respectful place.

• Did a few changes to the Cosplay Convention map to make it look more aesthetically pleasing.

• Changed an event in the Sato route where you meet a “certain” character to shorten the path that character has to walk to drastically reduce the length of that event.

• Changed the event where Ayame checks herself at the mirror in her house to fade in instead of instantly appearing.

• Fixed a bug in Sato route where the same day would loop constantly until your morale was lower than 30 but higher than 20.

• Changed a few tips in the Kinky Kittens route in the CG room to reflect the actual requirements to see the scene.

• Fixed a bug in Sato’s route where the night tint would remain during the next day.

• Fixed an issue where the Family Route would erroneously seem unlocked in the CG room after Jack spies on Ayame in the shower.

• Steve no longer shows up at the door of the Kinky Kittens strip club in case you no longer meet the requirements to work there due to cancelling Sato’s route.

• Fixed the dreadful no clipping bug after the Cosplay Convention weekend that would happen in a specific scenario.

• Fixed an issue where the Cosplay Convention weekend would create conflicts with other events that can happen automatically on weekends.

• Fixed an issue where triggering the subway chikan scene after working at the Kinky Kittens strip club would create conflicts.

• Fixed an issue where if you quit the Garcias route on a Friday/Saturday/Sunday, Robert would magically materialize in the couch.

• Fixed an issue where Ayame could accept some jobs on Friday and get the interview for the next day, Saturday.

• Fixed a bug where Ayame could go inside the Melvin’s Pub and leave right away on the 5th day of work which would cause a LOT of issues.

• Fixed a few inconsistencies in the story in a few places.

• Fixed an issue in the Officer Chloe minigame where some guards could see you through the wall. This should also make the last part of the minigame a little easier as they lost a bit of range.

• Fixed an issue where leaving the office and reaching “Fallen” state on the same day would cause conflicts.

• Edited a lot of typos and grammar errors in game dialogues, menus, etc.